In this article, I will show you how to enable EPEL repository on CentOS using Ansible. So, let’s get started.

To enable EPEL repository on CentOS 7 or CentOS 8 machines with Ansible:

There are many articles on LinuxHint dedicated to Installing Ansible and configuring hosts for Ansible automation. You may want to check these articles out if necessary, for your purposes.

First, create a project directory ~/project with the following command:

Navigate to the ~/project directory with the following command:

Create a new file hosts in the project directory and open it with the nano text editor as follows:

A blank file hosts should be created and opened with the nano text editor. 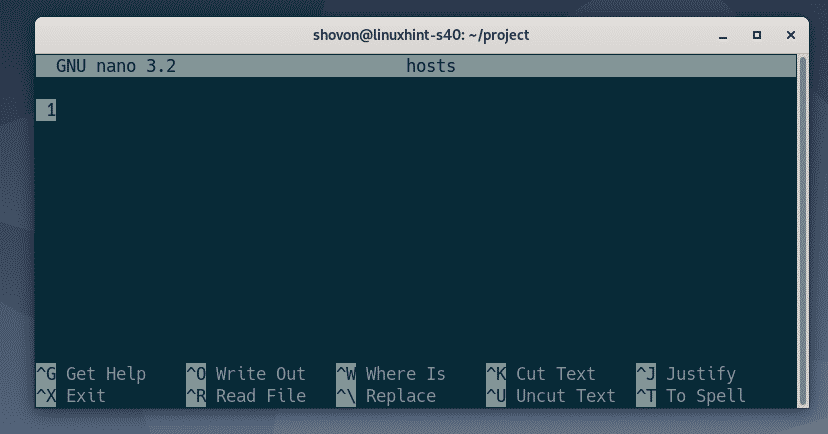 Type in the IP addresses or DNS names of the target CentOS 7 and CentOS 8 machines (where you want to enable EPEL repository) in the centos section of the hosts file, as follows:

NOTE: You can find the IP addresses of your CentOS hosts with the following command:

If your CentOS hosts have DNS names configured, you should be able to find them with the following command:

The final hosts file should look as shown in the screenshot below.

Now, save the hosts file by pressing X followed by Y and .

Type the following lines in the ansible.cfg file:

Once you have completed this step, save the file by pressing X followed by Y and .

Now, create a new Ansible playbook enable_epel_repo.yaml in the playbooks/ directory as follows:

Next, type the following codes in the enable_epel_repo.yaml file:

hosts: centos, selects only the hosts in the centos group from the hosts file.

user: ansible, the SSH username of the hosts (where Ansible will run the tasks) will be ansible.

These two tasks are almost identical. The only differences are the package manager modules (dnf and yum) used in the tasks and the CentOS version checking code.

state: latest, the package epel-release should be installed. If the package is already installed and an updated version is available, then the package will be updated.

ansible_facts[‘os_family’] == ‘RedHat’, checks whether the host OS is CentOS or RedHat.

ansible_facts[‘distribution_major_version’] == ‘8’, checks whether the host OS version is 8 (CentOS 8 or RedHat 8, in this case).

ansible_facts[‘distribution_major_version’] == ‘7’, checks whether the host OS version is 7 (CentOS 7 or RedHat 7, in this case).

Then, save enable_epel_repo.yaml file by pressing X followed by Y and . 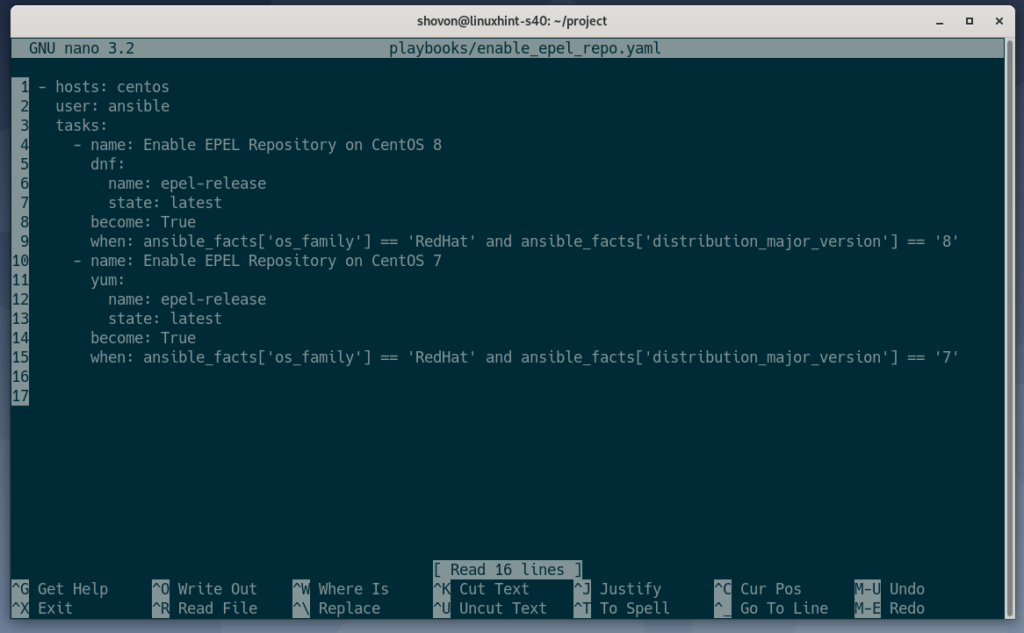 Now, you can run the Ansible playbook as follows:

The playbook should run without any errors and the EPEL repository should be enabled on both the CentOS 7 and CentOS 8 hosts.

As you can see, EPEL repository is enabled in my CentOS 8 host.

As you can see, EPEL repository is enabled in my CentOS 7 host.

So, that is how you enable EPEL repository on CentOS using Ansible. Thanks for reading this article.

Freelancer & Linux System Administrator. Also loves Web API development with Node.js and JavaScript. I was born in Bangladesh. I am currently studying Electronics and Communication Engineering at Khulna University of Engineering & Technology (KUET), one of the demanding public engineering universities of Bangladesh.

How Do Ansible Filters Work?

Set Date and Time in AlmaLinux, CentOS and Rocky Linux

Set Date and Time in AlmaLinux 8, CentOS 8 and Rocky Linux 8