“minikube” is a lightweight tool that allows you to run Kubernetes locally on your Linux, macOS, or Windows-based systems. It lets you enjoy almost all the features of Kubernetes without actually installing it on your system. It has the ability to run a single-node Kubernetes cluster on your target system. This tutorial shows you how to install minikube on Ubuntu 20.04.

To have minikube installed on a Ubuntu 20.04 machine, the following steps are to be performed:

First, we have to update our system quickly with the command shown below so that we can proceed further:

Once the target system is successfully updated, we will have to install the Snap daemon on it because we will be using it, later on, to install minikube on our system. The following command needs to be executed in this regard:

The Snap Package Manager will take some time to be installed and will finish its installation with the messages shown in the image below: 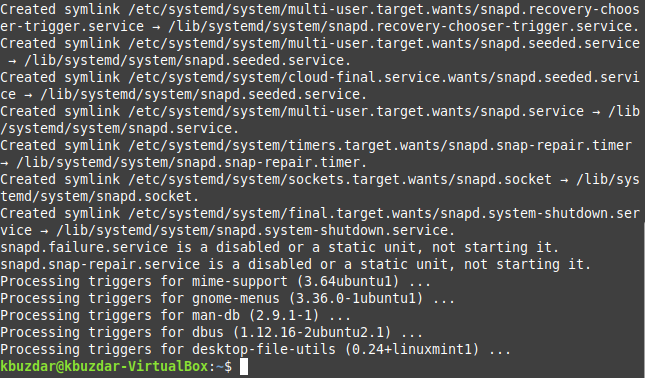 After the installation of the Snap daemon, we will install minikube by executing the following command:

The message shown in the image below indicates that minikube has been successfully installed on our Linux Mint 20 machine.

Finally, the installation of minikube can be confirmed by finding out its version with the following command:

The version of minikube installed on our target system as a result of performing this procedure is shown in the image below:

If you want to remove the minikube package from your system at any time, then you will simply have to execute the following command:

The message shown in the image below indicates that minikube has been successfully removed as a result of executing the above-mentioned command.

With the help of this tutorial, you can quickly install minikube on your Linux system and enjoy the great features of Kubernetes without actually installing it on your system. Moreover, this package can be very easily removed from your system with a single command that has also been shared in this article.

How to Install ZSH Shell and Oh-My-Zsh on Ubuntu 20.04

How to connect ONLYOFFICE Desktop Editors v.6.3 to your Seafile server