Hundreds of smartphones get launched every year, and manufacturers make outlandish claims for their products. A benchmark tool on your smartphone lets you test the manufacturer’s claim accurately.

Every phone benchmarking application is slightly different in analyzing your smartphone, but the grading system is primarily uniform in the industry. The higher your phone benchmark score, the better your phone’s performance, making you rank better amongst other competing smartphones. Let’s look at some of the best Android benchmark applications and their benefits.

Antutu is hands down the leading name in the Android phone benchmark niche because of its exclusive feature set. The application gives you the option to run a full test, including all the tests on the platform, or you can opt for a custom test. Moreover, you get custom tests for UX (User Experience), CPU, RAM, GPU, and IO (Storage). The in-depth CPU performance index shows different scores for single-core performance and multi-core performance. 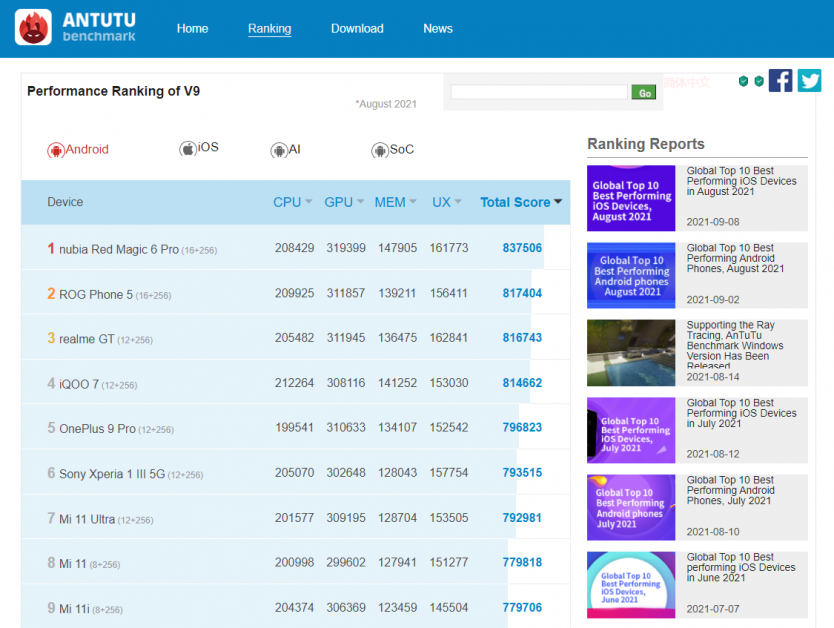 The overall score on the Antutu benchmark does not hold much significance on its own; instead, the score helps you compare your smartphone with other smartphones by looking at their scores. Speaking in layman terms, a phone scoring 20,000 is twice as fast as a phone scoring 10,000.

You also get the option to compare your phone among other smartphones and get your ranking on the Antutu leaderboard. Currently, the phone benchmark application offers its services for iPhones, Ubuntu, Windows, and Android.

Separate tests for 2D graphics and 3D graphics mean that you get a comprehensive analysis of the graphical capabilities of your device. Also, the memory and disk tests are a great way to analyze the overall application startup times and snappiness of your device. 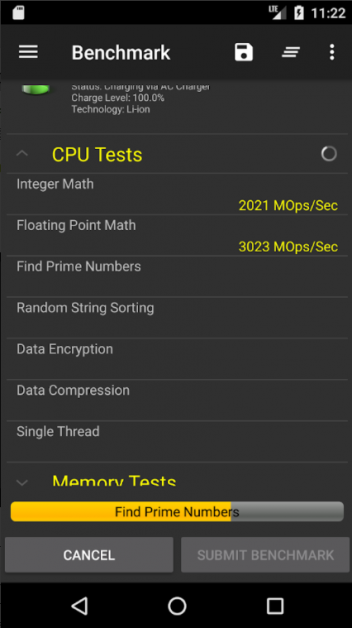 PassMark comes with the option to test multiple CPU testing, giving you single-core and multi-core performance reports for your device. Using their online database, you can compare your device with several other devices on crucial aspects like read and write speeds and graphic performance. That said, the application also shows the detailed spec list of your device, eliminating the need for additional software like CPU-Z.

Smartphone manufacturers usually tend to hide the storage specifications like the UFS (Universal Flash Storage) versions while advertising their low-end devices. Alert consumers like you should always test the storage speeds of your smartphones, and Androbench serves as the perfect tool to do so. 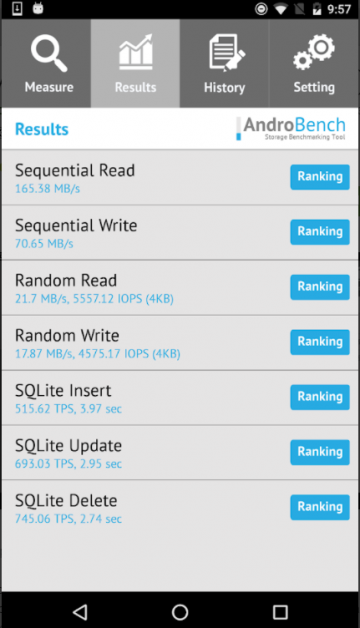 Androbench is a ‘Storage Only’ phone benchmark tool that gives you an in-depth analysis of Sequential Read, Sequential Write, Random Read, Random Write, SQLite Insert, SQLite Update, and SQLite Delete. Moreover, you get the option to choose the Micro test or the SQLite test. The Micro test helps you analyze your device’s overall storage speed by testing it in different scenarios. On the other hand, the SQLite test enables you to test the storage performance by insert, update, and delete queries on a database table.

The results get reflected in the Result section of the application, containing all the testing parameters and their respective storage speeds. You can also see the results of previous tests on your device using the History section on Androbench.

A smartphone’s gaming capabilities largely depend on its graphical power and the GPU it uses. 3D Mark is the leading graphic benchmarking application in the industry. The phone benchmark application comes with several graphics-intensive tests like:

The 3DMark Wild Life test is the most widely used graphic test on the platform. It analyses your smartphone with a balanced graphic load and then compares it to other smartphones that ran the same test. You further get two options in the 3DMark Wild Life test; a quick benchmark and an extended stress test. The quick benchmark tests your phone performance under discrete but heavy loads, and the long stress tests simulate the long gaming performance of your device.

The 3DMark Wild Life Extreme test is ideal for the newer Android devices that come with better graphic capabilities. The graphic load on this test is extremely high, and most smartphones struggle to get close to a 15 FPS mark. You should also expect your phone to generate excess heat while running the phone benchmark.

The Sling Shot/ Sling Shot Extreme phone benchmark is perfect for comparing older phones to the graphic performance of older iPhones or iPads. The reports give you an in-depth analysis of your phone’s graphical competence.

The 3DMark application is entirely free and has no in-app ads, which boosts the user experience and brings you accurate results. 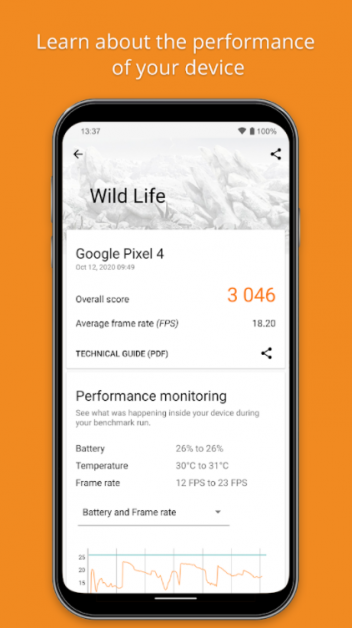 Geekbench 5 is the industry standard for testing the CPU competence of Android smartphones. Modern smartphones come with multi-core CPUs to divide the workload between different applications. This lightweight application gives you an in-depth analysis of your single-core and multi-core performance. Moreover, Geekbench 5 bombards your CPU with intensive and non-intensive tasks throughout the phone benchmark process to comprehensively analyze your smartphone. 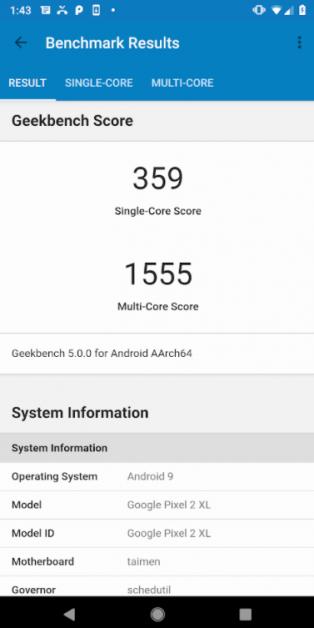 The Compute Benchmark is a new addition to Geekbench 5 that lets you identify the graphic capabilities of your device using tools like OpenCL, CUDA, and Metal APIs. Moreover, you can use their cross-platform comparison tool to compare your devices with tablets, PCs, and more.

Geekbench also shows the in-depth specifications of your device, including CPU name, CPU cores, CPU clock speeds, Device Model, Operating system, Motherboard, Governor, and much more. You can compare other smartphones with your device after getting the results from the CPU benchmark.

Disk Speed is yet another storage benchmarking application that comes with a plethora of features. You can use this application to benchmark your Internal Storage, External Storage, Secondary Storage (connected USB devices or hard disks), or a custom location. Disk Speed auto-detects your phone’s internal and external storage, saving you from the hassle of manually selecting storage. 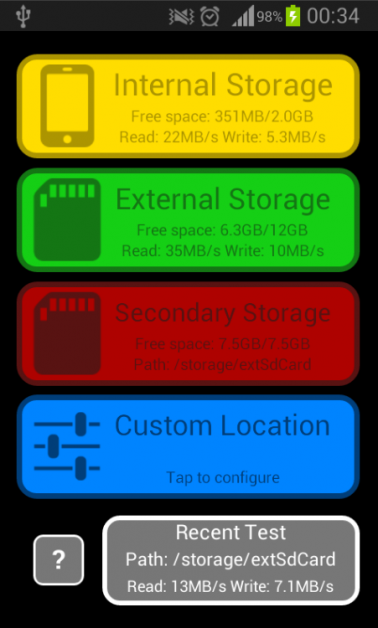 The simple and powerful phone benchmark tool is just 1.5MB in size, making it a perfect option, especially if you are low on storage space. Moreover, the application comes with a storage slider that lets you choose the load with which the test proceeds. Make sure to select a decent amount of storage as lesser storage can lead to inaccurate results. You should make sure that the test location has a 20% free space so that the test doesn’t freeze your device. Also, make sure to close all the background applications before running the phone benchmark.

PCMark uses a very different approach for benchmarking your smartphone. While most phone benchmark applications use a custom algorithm that includes heavy workloads, these workloads are often unrealistic. On the other hand, PCMark makes sure that the workload is based on real-world applications and APIs.

Moreover, the application doesn’t consider the storage, CPU, and GPU as discrete components but considers the unison of these devices as a system. Therefore, most of the tests on PCMark don’t benchmark these discrete components; instead, it tests the entire system as a whole. The Work 3.0 test on PCMark is the evolved version of the very famous Work 2.0 and Work 1.0 benchmarking line-up. Work 3.0 tests your device for web browsing, video editing, writing, data manipulation, and photo editing performance to give you factual information about your phone in real-world scenarios.

GFXBench is yet another comprehensive graphic benchmarking tool with a wide variety of tests and cross-platform compatibility. The application lets you test the graphic performance, long-term stability, render quality, and power consumption while benchmarking the device. The best part about GFXBench Benchmark is its capability to run cross API benchmarks using Vulkan and OpenGL.

The phone benchmark application gives you plenty of options to choose from while testing your device. Each of these tests varies in the workload they apply to your GPU: 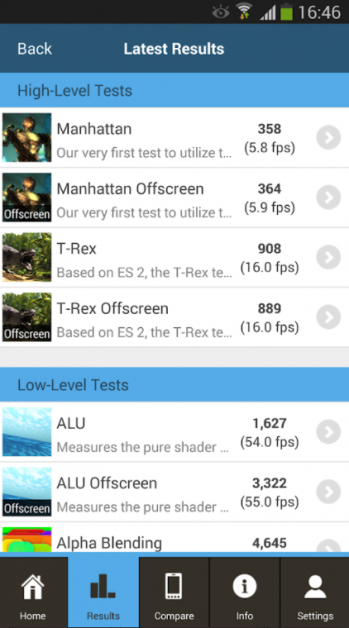 You can compare the benchmark results of your device with other phones using the Compare section on GFXBench. Also, you can view the entire graphical specifications of your smartphone in the Info section.

Benchmarking your device is a vital process in knowing your device better. Phone benchmarks help you understand your daily driver’s abilities and weaknesses and let you compare them against other contenders. Antutu, PCMark, and PassMark are great overall benchmarking applications that analyze your entire smartphone in one go.

The PCMark application is beneficial to visualize the day-to-day performance of your smartphone. You can choose between Androbench and Disk Speed-applications to benchmark your storage. The 3DMark or GFXBench application are great options to test the graphics. That said, make sure to close all the background applications before running any of these benchmarks for accurate results.

Now check out the Best Antivirus Solution for your Mac devices.

How To Disable Cache in Chrome, Firefox, Safari, and Other Browsers

How to Install Apache Solr on Debian 11