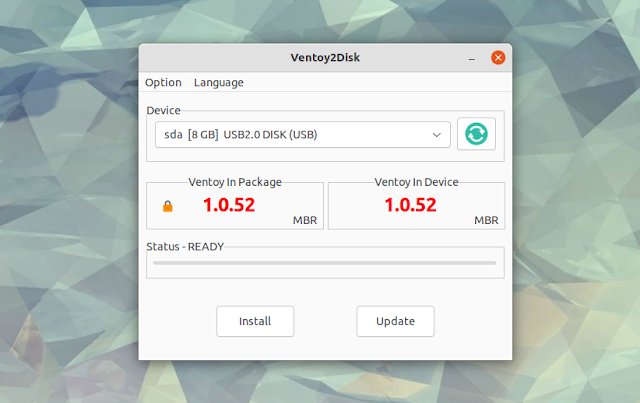 Ventoy, a tool for easy bootable USB drive creation (simply copy the ISO to the USB), has been updated recently with a native GUI for Linux.

Ventoy is available for Microsoft Windows and Linux, and it can create bootable USB drives containing Linux and Windows ISO files.

You need to install Ventoy to a USB drive, then every time you want to create a bootable USB drive, all you have to do is copy the ISO to the USB. There’s no need to format the USB drive. You can copy as many ISO files as you wish (even combined Windows and Linux ISOs), and when booting from the USB, Ventoy shows a list of available ISO files, allowing you to boot from the one you select. I don’t think I’m exaggerating when I’m saying that Ventoy is probably the best bootable USB creator for both Linux and Windows.

What’s more, since you don’t need to format the USB drive, you can continue to use it for other purposes. So you can copy other files to the USB, and it won’t interfere with Ventoy.

Ventoy also features support for legacy and UEFI Secure Boot, it supports persistence for some Linux distributions, it supports ISO files larger than 4GB, and it can be upgraded without reformatting the USB.

Initially, Ventoy was released for Linux as a command line tool. Back in March 2021, it added a web UI, but that was a bit clunky to use, especially since its aim was to simplify things, which it didn’t fully do.

With the latest 1.0.52 though, Ventoy has added a native GUI for Linux, which you can use to install Ventoy onto USB devices, which is similar to the one that’s been available on Windows since the early Ventoy releases. Once you install Ventoy on a USB stick, all you have to do is copy some ISO files to the USB, and you’ll get a bootable USB drive.

The release notes mention that the new GUI uses either GTK or Qt, depending on what you prefer (I’m not sure which one is used in the precompiled binaries).

The new Ventoy Linux GUI lets you choose the USB device, shows the current Ventoy version and the Ventoy version installed on the USB drive, and it has various options that allow you to:

In case double-clicking the executable doesn’t work, open a terminal, navigate to the folder where you’ve extracted Ventoy and run it using, e.g. for the x86_64 architecture:

On the downloads page you’ll find Linux and Windows binaries. If you prefer to download the source code, visit the Ventoy GitHub repository.

Macast DLNA Media Renderer: Easily Cast Videos, Music And Pictures From A Phone To Your Computer

JamesDSP For Linux Is An Audio Effect Processor For PipeWire Or PulseAudio (Equalizer, Bass Boost, More)